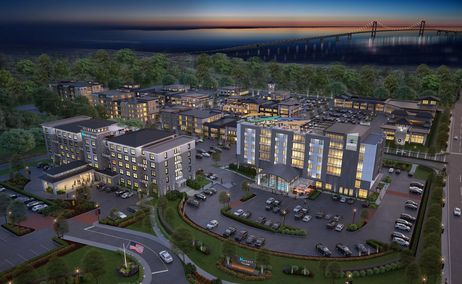 The prominent Newport Grand Casino building at 150 Admiral Kalbfus Road, which in its multiple iterations has been the source of conversation on Aquidneck Island for decades, is coming down.

The owner of the 23-acre site that housed the former casino, Johnston-based Carpionato Group, unveiled its plan at a press conference on July 23 to demolish the building to make way for a $100 million mixed-use development expected to break ground in early 2020. Carpionato Group purchased the property in 2018 for $10.15 million from Twin River, LLC.

Billed by the real estate development company as “the largest private development project in Newport to date,” the multi-building complex is slated “to serve as the amenity anchor for the Newport Resilience Innovation District,” promising approximately $1.5 million in tax revenue to the city, according to a press release from Carpionato.

“This is perhaps the most visible property on Aquidneck Island,” said Kelly MacArthur Coates, Carpionato Group president and CEO. “We have an incredible opportunity to marry a magnificent improvement to the transportation network with a site ripe for redevelopment. It is one of the singularly most unattractive buildings on the island.”

The proposal calls for two six-story hotels, totaling 260 rooms, and two six-story apartment buildings. The hotels will be about 100,000 and 82,000 square feet, respectively. About 165,000 square feet of the project’s approximately 520,000-square-foot footprint will be dedicated to office, retail and restaurant space.

The group held the press conference in the lobby of the former casino, where Coates outlined the vision for the property. He was joined by members of Carpionato’s leadership and architects involved in the project design.

“We have rooflines that tip the hat to the colonial experience that Newport is known for, but also [we are] moving toward other directions to the millennial aspect. Everything is not just one sea of asphalt or concrete,” said Spencer McCombe of Cordtsen Design Architecture, which has worked on the project’s master plan that includes a mixture of modern energy efficient design elements with a nod to traditional architectural features found throughout the city. Retail and restaurant spaces are part of Carpionato Group’s proposal for the Newport Grand property.

The developers are hoping to capitalize on the infrastructure and economic development planned for the North End, with the creation of the Innovation District and the realignment of the Pell Bridge ramps set to ease traffic congestion and spur job creation in that part of the city.

“Our hotels are not here to feed off of the existing [business] traffic in Newport,” said Coates. “We have to generate our own traffic …We intend to generate [off-season] demand.”

Joe Pierik, Carpionato Group vice-president of retail leasing and acquisitions, said the development aims to thrive on becoming a stand-alone destination that draws people through the offered amenities.

“Whether you are living, shopping, working or playing here on the site, [we want] to create a destination location where people are going to want to linger,” he said. “That is achieved through the creative mix of uses.”

Coates said the development will be a catalyst to a wider change in the neighborhood, helping to draw technology and research companies to the area. He touted a pair of companies committed to 50,000 square feet of office space if the plan is approved, though he declined to name them.

“They are not interested in being here under the current circumstances,” he said. “There are lots of folks who would love to be here in an innovative office building if they were given the right opportunity.”

Carpionato Group will be seeking an amendment to the city’s zoning map from the City Council in the fall, where it will submit a proposal for a mixed-use overlay in the North End commercial/industrial district restricted to properties 20 acres or larger.

The project will also need approval from the Rhode Island Department of Transportation and the Department of Environmental Management. Coates pledged to host a series of public meetings in the run-up to council approval to gather citizen input.

In addition to the main entrance on Admiral Kalbfus Road, there will be an entrance on Halsey Street, as part of the RIDOT bridge realignment that will transform the narrow street into a wider boulevard.

Coates added that until the requisite authorities sign off on a final plan, nothing is set in stone.

“We will go through modifications of the project as we go through neighborhood meetings, as we do outreach and as we meet with the City Council and other city and state officials,” he said.

Asked about anticipated hurdles to bringing the project to fruition, Coates acknowledged there may be some local pushback.

“There is always going to be someone afraid of the unknown,” he said. “Until they show you the monster in the movie, you are terrified of what it is.”

Full article can be viewed here