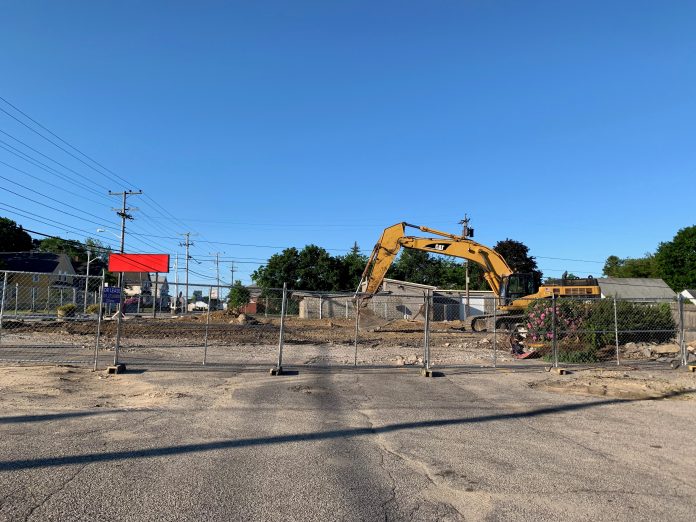 PICTURED IS THE site of the former Benny's retail location on Pawtucket Avenue in East Providence, which has been razed to make way for a Dollar General store to be built this summer. / PBN PHOTO/MARY MACDONALD

JOHNSTON – The Carpionato Group has spent more than $30 million on construction and renovation in preparing the former Benny’s retail locations for new tenants, according to its chief executive, who said about half of this portfolio has been committed to new uses.

In 2017, the Johnston-based Carpionato purchased 29 Benny’s locations, shortly after the iconic retailer closed.

At this point, the conversion of the former Benny’s sites into new uses is about 50% complete, said Kelly MacArthur Coates, the Carpionato president and CEO. He estimated his company will spend $75 million on construction and renovation in total.

Construction costs have increased since the real estate was purchased, he noted, which has been challenging.

“There’s no way out but to work through it,” he said.

Several locations in Rhode Island involve new construction rather than renovation, including on Pawtucket Avenue in East Providence, where the original Benny’s has been razed.

A new building will be constructed this summer to house a Dollar General store, said Coates. Construction should be completed within five months, he said.

In Seekonk, former Benny’s sites on Central and Taunton avenues have been renovated to accommodate a Dollar General and Ace Hardware, which jointly occupy the spaces. The site on Central Avenue will also feature medical offices in a standalone building.

Three locations, in Warwick, Cranston and South Kingstown, have been renovated for Ocean State Job Lot stores. The Warwick location will be sold to the company, while the other locations will operate under long-term leases.

A former Benny’s on Park Avenue in Cranston is under construction, and will be reopened as a Dollar Tree, according to Coates.

In Middletown, on West Main Road, the former Benny’s will be replaced with new construction. The location will create space for a BayCoast Bank and a Riverhead Building Supply location.

Mary MacDonald is a staff writer for the PBN. Contact her at macdonald@pbn.com.